Healthy relationships only are possible if both people have healthy relationship skills. The more men and women who read these books, the more likely it will be to find healthy life partners. Sign up to give a gift of valuable life skills to those who are most valuable in your life!

Sign up for a chance to win
a free copy!

Sign up to stay updated and be notified about when Digital Dignity hits the shelves and is available for purchase!

About Digital Dignity for the Lady and the Gentleman

With the introduction of the 21st century arrived the convenience of Internet dating and casual acquaintanceship. Gone were the days of courageous male pursuits in the face of courtship rejection, as well as female anticipation and excitement of courtship and commitment. With a computer screen as a wedge between, both parties have evaded romantic attachment and a significant degree of risk and rejection. Have we benefited from this digital age? With many decades of feminism’s divisive disempowerment, hook-up culture, denial of gender identity and nature, and women’s quest for equality by taking advantage of and leveling the romantic and occupational playing fields, the confusion in roles and tension in relations have never been greater. The technological advancements that were meant to help enrich our lives have merely muddied the waters of an already turbulent environment.

In Digital Dignity, Danica De La Mora demonstrates the importance of traditional values, gender roles and courtship, and describes the complimentary differences between men and women, the nature of attraction and magnetism, as well as the instrumental parts they play in the symphony of romance. Together, with the tools of digital dating and the embracement of feminine and masculine dignity, readers are equipped with an unstoppable force in finding love.

Never before has it been possible to access and meet so many prospective mates in any corner of the world. While many people still are wary of online dating, Ms. De La Mora reveals how you can utilize online dating as a point of contact, ensuring that you stay safe, broaden your exposure, and avoid wasting time, energy, hopes, and opportunities.

Join Danica De La Mora on the online dating expedition of a lifetime in order to access the countless possibilities of finding the love that awaits you! 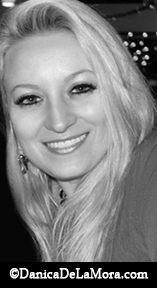 For more than a decade, Danica De La Mora has been following a plant-based lifestyle, building on her collection of knowledge through extensive study and educational lectures by doctors who are at the forefront of the latest in nutritional research. She obtained a certification in Plant-Based Nutrition from Cornell University. She also holds a degree in Communication and Film Studies from St. Andrews University and is a graduate of the Barbizon modeling academy. She was the first student to write, direct, and star in her very own feature length movie in college. She has a background in graphic design, multiple forms of editing, DVD authoring, film transfers and preservation, videography, photography, and photograph restoration, as well as print media production, having been reared in a family who owns print media publications all over the Southeastern United States.

Danica De La Mora has been strongly influenced by her family with whom she is very close. She is experienced in Latin and ballroom dancing, as well as music, with her grandmother’s ownership of a prestigious etiquette and dance school for 50 years and her father having placed fourth in the world on accordion out of thousands of contestants. In addition to her own research and experience with relationships, she has obtained substantial knowledge through her mother’s wide-ranging background involving social work, alcoholism treatment, psychology, and print media publishing. Additionally, her grandparents’ loving and traditional marriage of nearly 60 years provided her with an excellent foundation for understanding successful relationships, complementary gender differences, identities, and roles.

Danica De La Mora instructs groups and individuals interested in changing their diets for better health and long-term weight management. She helps adults and children refine themselves with traditional and conservative elegance. She also counsels ladies and gentlemen in their romantic relationships and helps them find the fulfilling lives they were destined to enjoy.

Proud graduate of the Center for Nutrition Studies, Cornell University